This must be one of the most delayed race reports ever.
I wasn’t sure where to go with this, but knowing my propensity for verbosity.. Ive decided to try and keep this short and sweet.

Two weeks ago I ran my first marathon. It was a truly fantastic experience.

I had planned very carefully how I was going to get through the race. I knew the key was to not go out too hard and just stick to the plan. I planned to keep an 8:30 AP for the first 13 miles. Then I planned to let myself speed up slightly up to the 20 mile mark.. then, I was just going to see how it went for the last 10k.

The first 13 miles was fantastic. We started in the Olympic stadium in Amsterdam and it was amazing to start with so many people. For the first 13 miles I did genuinely have to keep a close eye on my Garmin to stop myself from speeding up too much. As this was my first marathon, I was starting pretty near the back… which was good as it meant I spent the majority of the race overtaking people.. but it was tough in some ways as I had to be my own pacer, and i struggled to slow myself down with my excitement, that of the other runners and the support of the crowd.

Once I hit the halfway mark I allowed myself to speed up.. but just a little bit, to about an 8:15 AP. Once I hit 20 miles, things were starting to get tough. By this time my right knee had already been hurting for a few miles, various other parts of my legs were sore and my left calf was starting to cramp up.

I had chatted to one of my co-workers, who has about 4 marathons under his belt, and he mentioned to me that one really important thing once you get past 20 miles is DON’T WALK. This makes a lot of sense to me, however when i felt that left calf start cramping, i stopped and stretched it for about 10 seconds, then moved on. from this point and for about the next 5k, i was slowed down. I made sure to keep sub 9, but it was tough and i could feel that I was close to the calf muscle seizing up. I could also feel that speeding up at all would be the trigger to cause that to happen! So for that 5k i slowed, but not too much. the last 3 miles I was able to speed up again, to around the pace I ran the first half at. Most importantly, I finished strong.
Strong… and VERY happy. 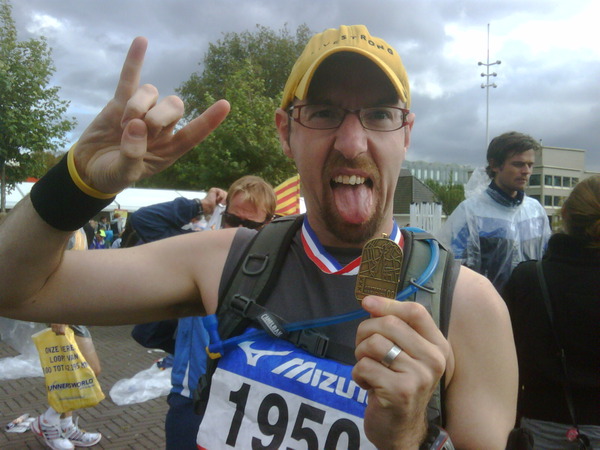 I have to say, finishing this marathon was one of the proudest achievements of my life. Its probably the hardest and most rewarding thing Ive ever done by myself and purely for myself. Throughout my life to date, I know I have achieved a lot… I’m not going to list off things as I’m not trying to be boastful… but I think this was the biggest thing that I’ve done just for me, and it felt great.

My finishing time was 3:43:41. A time I’m very proud of an very happy with.
After finishing, I met Steph and we went for a beer. I gotta say, beer tastes good after a marathon! 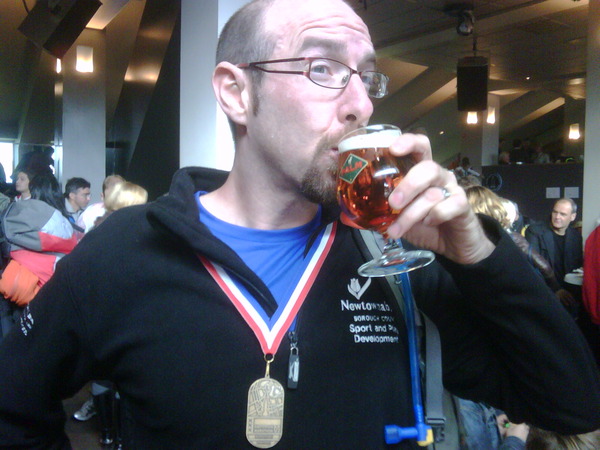