I haven’t had time to write my blog on running in Sweden, will try and do that sometime soon.. however… I just got a mail through from 23 and Me to say my genetic profile is ready!
It was supposed to take 6-8 weeks… Now, as I work in this business, I am aware of the technology that 23 and Me use and how long running a sample takes. To be honest I’m either impressed by LabCorp’s turnaround times or surprised they aren’t busier.
Anyway.
Its 7:45 on a Saturday morning. My wife is out at work and my lil 2 year old son is sitting beside me eating his breakfast and insisting that I should give him chocolate. I guess this is a good time to check out what sorta genes Ive passed on to the little guy.
I’m going to write some notes on this as I go along.

First of all… Where do I come from????
This was the one bit I was figuring i could guess with about 99% accuracy.
First glance..
Yes, I’m European. 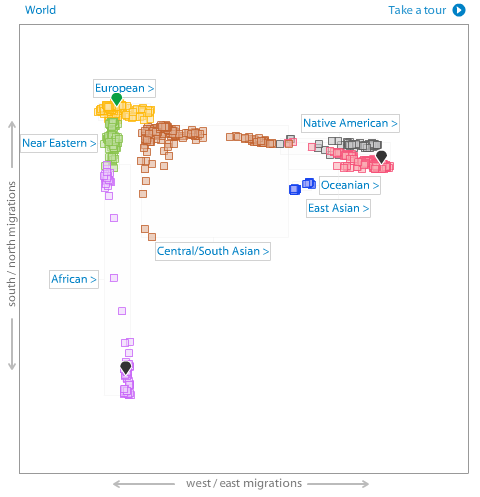 I’m highlighted by the green icon at the top of the Europe part of the scattergraph.
I can zoom in and find I’m from Northern Europe and then one more click and.. YES, I am Irish. 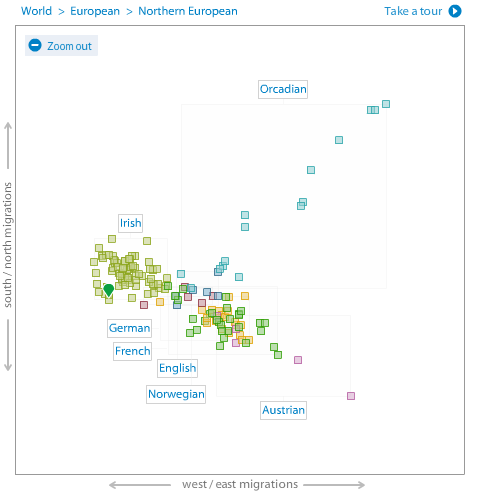 So, on to the meatier stuff, the clinical reports. Again, this is the area I work in, so this is of particular interest to me. I fully appreciate that there can be many errors here but its still of interest.

Interesting stuff. I don’t flush when I drink alcohol, which I knew. I can taste bitterness, which again I know. My Earwax type is wet… which I definitely knew. My eye colour is “likely blue”, well that’s close enough, my eyes are blue/ green and vary so technically speaking on any given day it is indeed likely they will be blue. Lactose wise I am likely tolerant. I had often wondered about this. If I eat breakfast cereal early in the morning I feel like crap. Sometimes dairy does make me feel bad, other times it doesn’t bother me at all. At least I know whatever the problem is its not likely to be genetic. I’m not resistant to malaria, so I guess I will be as pissed off as ever at mosquito’s and interestingly my muscle performance indicates I’m a likely sprinter. Interesting, if i probe this a little I find the following info..

I have “Two working copies of alpha-actinin-3 in fast-twitch muscle fiber. Many world-class sprinters and some endurance athletes have this genotype.”

Of course they also add the “genes vs environment” caveat

“…muscle fiber only contributes a small part to your overall athletic performance. Other physical characteristics, such as lung capacity, and behaviors, such as regular exercise, also make important contributions to your prowess in sports. “

Which of course, I know. Its interesting info tho. At least I am not genetically inhibited.
Lastly on this section… Im not resistant to norovirus or HIV. Bummer.

Well, the lil guy is getting impatient so thats enough for now. The research reports are interesting so I may cover these in a separate post.