Since last posting I’ve had another race. On Sunday past I got up at a horribly early hour (5:30am) to drive to Derry to take part in the Liam Ball/ Northwest Sprint Triathlon. My “taper” for this race consisted of doing the most amount of cycling Ive ever done in one week, plus a bit of running and a wee swim. Basically.. this was a normal training week so no taper allowed! I started the week with some bike commuting. My daily commute is 30 miles, and this week I did 2 full days of bike commuting, thus clocking up 120 miles of cycling by Wednesday. I took Thursday as a rest day, had a 1 hour run on Friday, then on Saturday got in the pool for a quick check that I still knew how to swim as I hadn’t done so in 2 weeks due to getting a tattoo. Thus I arrived on race day, far from refreshed and rested.. but exited nonetheless.

I had decided to follow some advice from my buddy and favourite pro-triathlete John Hirsch and “race like a Buddhist monk”. I wanted to get faster in transition so no messing around with unnecessary crap. So I cut my transition setup down to the bare minimum 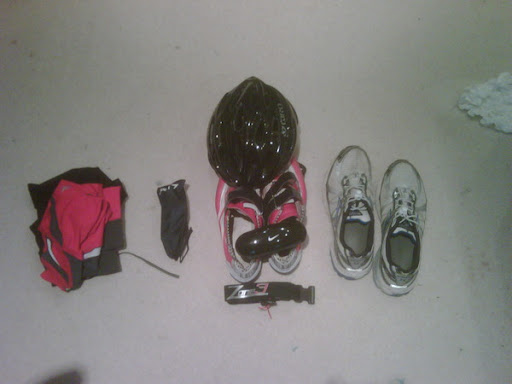 I was glad I had opted for this strategy, as to start off with.. the race had a hell of a transition. The pool was upstairs (yes.. UPSTAIRS) in the leisure centre, so T1 involved a run the length of the leisure centre, down the stairs, through the sports hall, and halfway across some gravel pitches. T:2 was pretty long too.. so I was already expecting to struggle to PR on this course due to this.

The bike leg was a challenge. Strong headwinds on the way out and a course that was a mile longer than the standard sprint distance. I think the total length was 13.4 miles. This was fine by me, and it was a nice bike course. However, that extra mile when you aren’t expecting it is kinda tough… not in total.. but when you’re expecting the turn around point to happen any second and it doesn’t!

T:2 was fun… I couldn’t find my shoes.. which slowed me down for a few seconds, and was equally frustrating and hilarious. The run course was, I think, a fair bit short of 5k as I did it way faster than I actually am capable of running at the moment.. but what the hell, I will take it.. a 20:11 5k sounds good!

In the last 100m, the guy who I had passed in the pool and who had been behind me for the whole bike leg, put a sprint on and passed me.. damn… I ended up finishing 4th in my wave, which I’m totally happy with, and 13th in my age group… which I am both HAPPY with and AMAZED by as its exactly the same placing as last time.

Overall, in terms of time I was a little slower than the last race, but with an extra mile in the bike leg and a lot longer transition, I consider it mentally a PR. RESULT.