Sunday the 6th of September goes down in my personal history as the first time I did two races. It may also be the last time, but I can’t guarantee that.

I started the day with the Newtownabbey Triathlon. If the Amsterdam marathon is my “A race” for the season and the Lisburn triathlon was my “B race” (due to it being my first tri) then this was probably my C or D race. Not due to not caring about it… but due to the fact that I haven’t trained for it specifically and was not expecting to do particularly well.

So, about the training… or lack thereof. Well, with my A race being a marathon, I’ve been running focussed. I’ve been doing speedwork.. But that’s been speedwork based on improving marathon pace. Not focussed on getting a good 5k pace. So I wasn’t expecting to be that fast on the run. For the bike, I’ve been doing some cycling, and I’ve got a road bike, but I haven’t been training on the bike as such. I’ve just done some cycling. As for the swim. Well, my last swim was in the last triathlon.. in July.

So I set out to enjoy the race and wasn’t too worried about times. I had a feeling the bike course was going to be hilly, so on Friday night I went out to ride round it and check it out… but I got lost and ended up cycling about 20 miles around the countryside. I had stayed enough on the course to realise that it WAS hilly and there was no way I was going to improve on my bike time, even though I was on a road bike. The last tri had a really flat bike course by comparison.

I arrived to my local leisure centre, picked up my pack and got marked with my number. I found out that I was in wave 3 of 5. It runs, basically, from slowest to fastest. In the last tri I was in wave 2 of 5. I guess this means I’ve moved up one level. While waiting to get into the pool I enjoyed chatting to a few of the other competitors. I bumped into one guy who I had shared a swim lane with in the Lisburn Tri and a few that I had met while marshalling at the Lough Neagh tri.

The swim was tough going. Luckily my lane only had 4 people (some of the lanes in wave 1 had 7 people) and I opted to go out second of the 4. My lack of swim training really paid off. I struggled from the start. I let the guy behind me pass me once, but then he slowed and I passed him again. I stuck with my second position, in the lane overall.. but it was not done with style or good technique. I think I did the breast stoke for about 10 of the 30 lengths and couldn’t find a pace or rhythm at all. I’m very surprised to see from the results today that I was actually 1 second faster than last time. It felt like I was a few minutes slower.

The bike course was tough, but fun. I’m proud to say I wasn’t passed by anyone on the bike, and I passed lots of others. One lady (who had been in my swim lane, and weirdly, had also been in my swim lane in the Lisburn triathlon) was a really strong cyclist and we had out own little race/ game of cat and mouse. She passed me a few times but I got back ahead each time and finished about a minute before her. At one point my chain popped off the big ring at the front, but I managed to guide it back on without panicking, unclipping or even slowing down much. The course was indeed very hilly. Nothing too steep, just lots of long slow inclines. The course was also a little longer than the standard 20km (I think it’s was closer to 22) so I was happy with my overall time. The bike racks were split up into waves and when I racked my bike it was the first one on the rack. I can’t guarantee that there weren’t people in my wave who racked in other racks, but I’m still happy that I performed pretty well within my wave.

The run was two laps of the valley park. Which meant that it was also hilly. I’m proud to say once more that no one passed me on the run. They must have compensated for the extra few KM on the bike by shortening the run a little as I did the run in 20:30. There is no way I could have done a full 5K in that time as I was probably averaging just under a 7 minute mile.

Wow. I just checked the results from my first tri… 1:23:13. ONE SECOND slower this time on a much tougher course. Last time I just about made it into the top 50%. This time made it into the top 30%. Sweet. Could definitely improve the swim. Transitions were slow too, could save 2 minutes there easily.

I finished happy and proud and completely enjoyed the race. The course was tough and I was happy with my performance considering the lack of triathlon specific training. I’m sorry it is the last tri of the season. Next season I will definitely be doing more.

My brother in law, and some twitter buddies, were doing the Laganside 10k. It started at 2pm and I finished the triathlon at close to 12:30. Having picked up my bike and loaded it into my car, I sped off down the road to pick up my son from my parents place and headed on down the road to meet my sister and Brother in law at the 10k course. We got parked and got to registration at about twenty to two. Just in time for last minute registration. I had planned on just having an easy run around the course without registering, and maybe pacing someone. Obviously though, having a number on your chest makes you run just that little bit faster. So I decided to run it after all. It was tough going. I had gone out hard in the triathlon and I kept the pace going for the 10k. It did cross my mind, at around the 2k mark that just maybe I could PR this. However, once I hit the 5k mark at about 23 minutes, I realised I had nothing left. I could keep my legs going at this pace but no matter what I did they were not going to speed up.

I completed the race in 46:37. This is about a minute slower than my 10k PR. A minute slower and it was my second race of the day. Couldn’t be happier! My sister managed to get a few picture of me running. The first was on the first of two laps. I was happy, smiling and waving at my son who was grinning and waving back.
The second is me crossing the finish line. Yes.. At that stage it was hurting and you can see it in my face.

Next time some one asks me for advice on how they should taper for a 10k, the answer will be “don’t do a triathlon 2 hours beforehand”.

I enjoyed it all though. It’s a great sense of achievement to finish any race. Finishing two in one day is just frickin’ awesome. 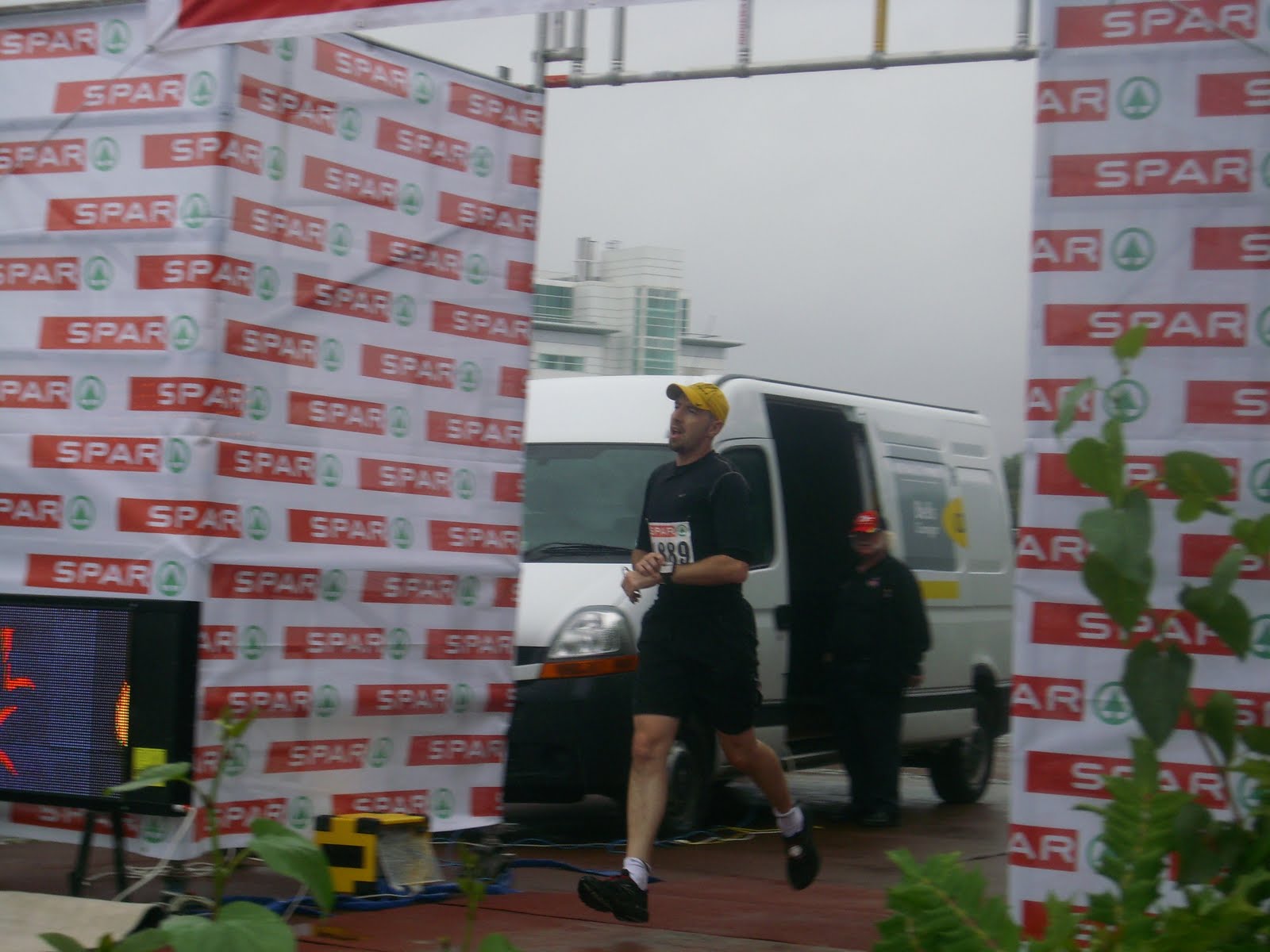 ← Another crazy weekendStrength and Determination →