Back in San Francisco / Endurance

This week I am back in San Francisco.
Transatlantic travel can be totally exhausting. Regular trips to the West coast are really hard to take.
Interestingly though, I think as I train more (particularly endurance training) it is getting easier.

Endurance: the power to withstand hardship or stress; “the marathon tests a runner’s endurance”

Basically, I’m finding that as I build my running and cycling endurance, its having a knock on effect of just building overall physical and mental endurance.

I flew over on Monday, which was a long day. I was up to travel to the Airport in Dublin at 5am. 2 hours journey to the Airport, 2 hours waiting around and an 11 hour flight later I arrived in SFO International airport. By this stage Ive been awake for 16 hours, but its only 1 in the afternoon.
I headed to my hotel, grabbed a cup of coffee and decided to go out for a run. Amazingly enough I managed to run just over 10k. It was about 3:30 in the afternoon by the time I headed out… which by my body clock was 11:30pm.

The biggest problem with the run was the fact that my hotel was at the top of the worlds steepest hill. 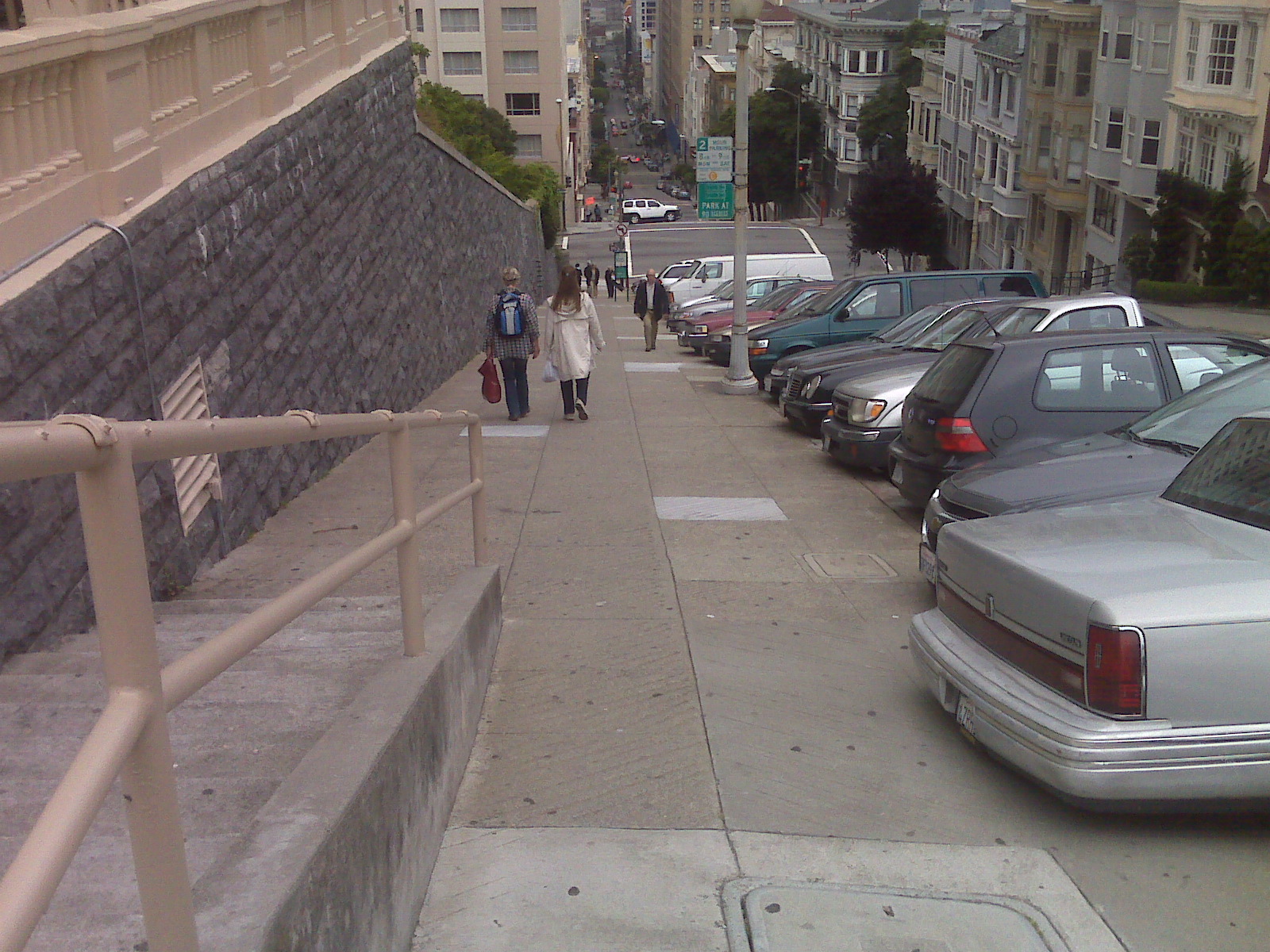 You can just about see the bottom. Running down this was virtually impossible so i sort of half jogged half walked.
For this first run, I had a destination in mind. I actually had to pop to Sports Basement to pick up a Tri Suit for my first Tri next month. I picked myself up a pair of Sugoi shorts and Zoot top. Man those things are tight. I’m by no means vain.. but I can be quite self conscious. Wearing these in public is going to be weird!
Anyway, shopping done I ran back to the hotel. I managed to run all the way up the hill right until the last block.. where the incline had to be close to 90 degrees.

I had to give up and walk. There was just no way I was running up that!

The next morning I woke up superearly, like 5am or something, and headed out for a run again. I planned on doing a run across the bridge again, but was undecided whether that would be Tuesday or Thursday morning… I decided to just run and see where I ended up. Once I saw the bridge through the mist, my mind was made up and off I went.. I couldn’t resist the call…

I do love the Golden Gate bridge, and as Ive said before, its a pretty awesome feeling to run across one of the wonders of the modern world. 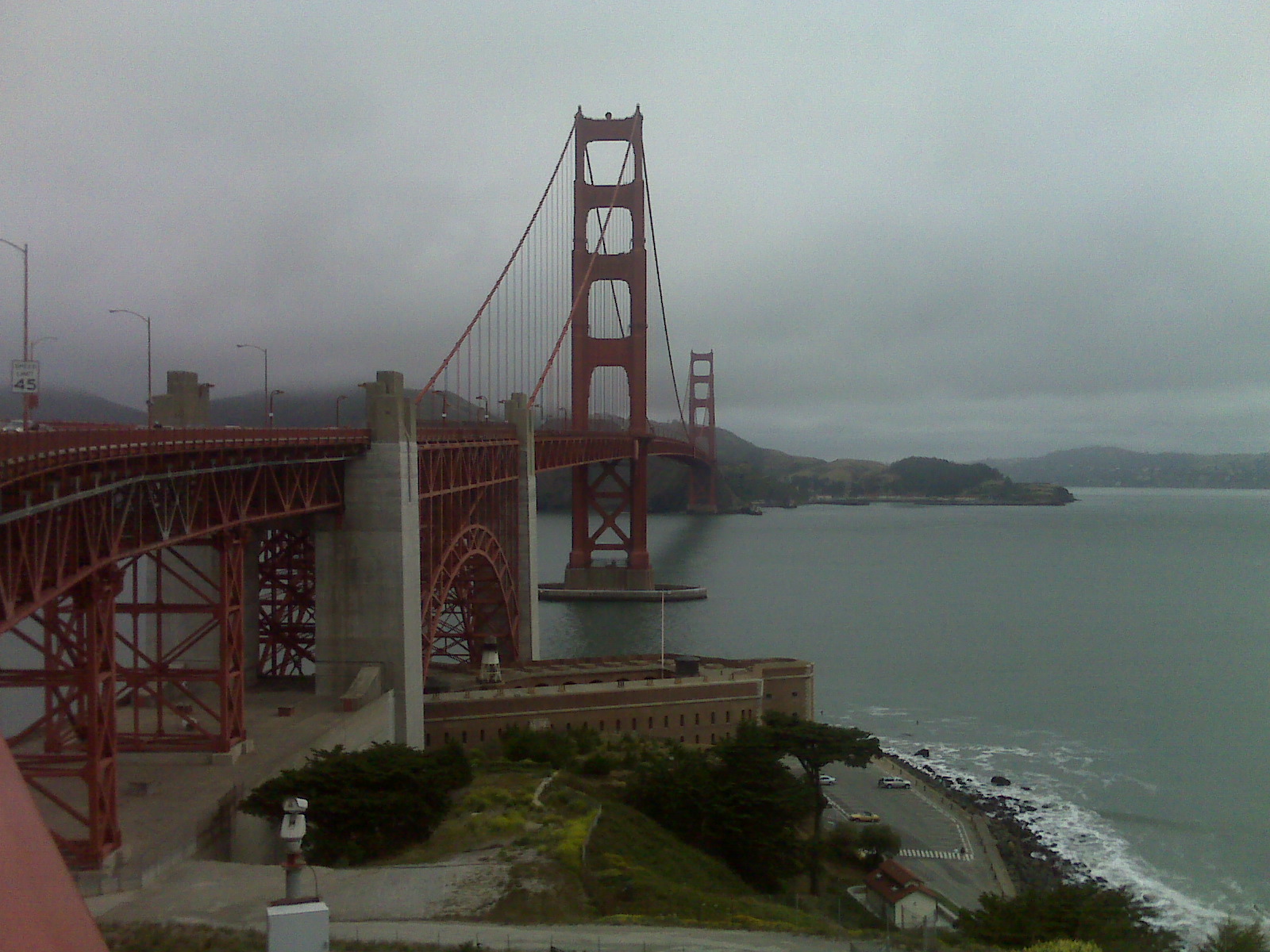 My camera phone really doesn’t do it justice at all, but I do like to take a few shots while out running.

I ran across the bridge and on the way back, weirdly, had to stop as there were guys doing something maintenance related. At that time of the morning, there weren’t a lot of people around, but there was me, a few more runners and about 10 hardcore looking cyclists all waiting by the time they let us through.

After that, my run was undisturbed and I had a nice easy 14 mile round trip that took me about 2 hours 13 minutes. Once more, I walked the last block of the hill.

While on this run, I had been watching the cyclists and thinking how much fun it would be to ride across the bridge as well. I popped into a bike rental place on my way back and picked up a leaflet. Turns out they rent some nice road bikes. The next evening, when I was finished work, I popped down and picked one up. It was a Giant Defy 2.. and man was it awesome. 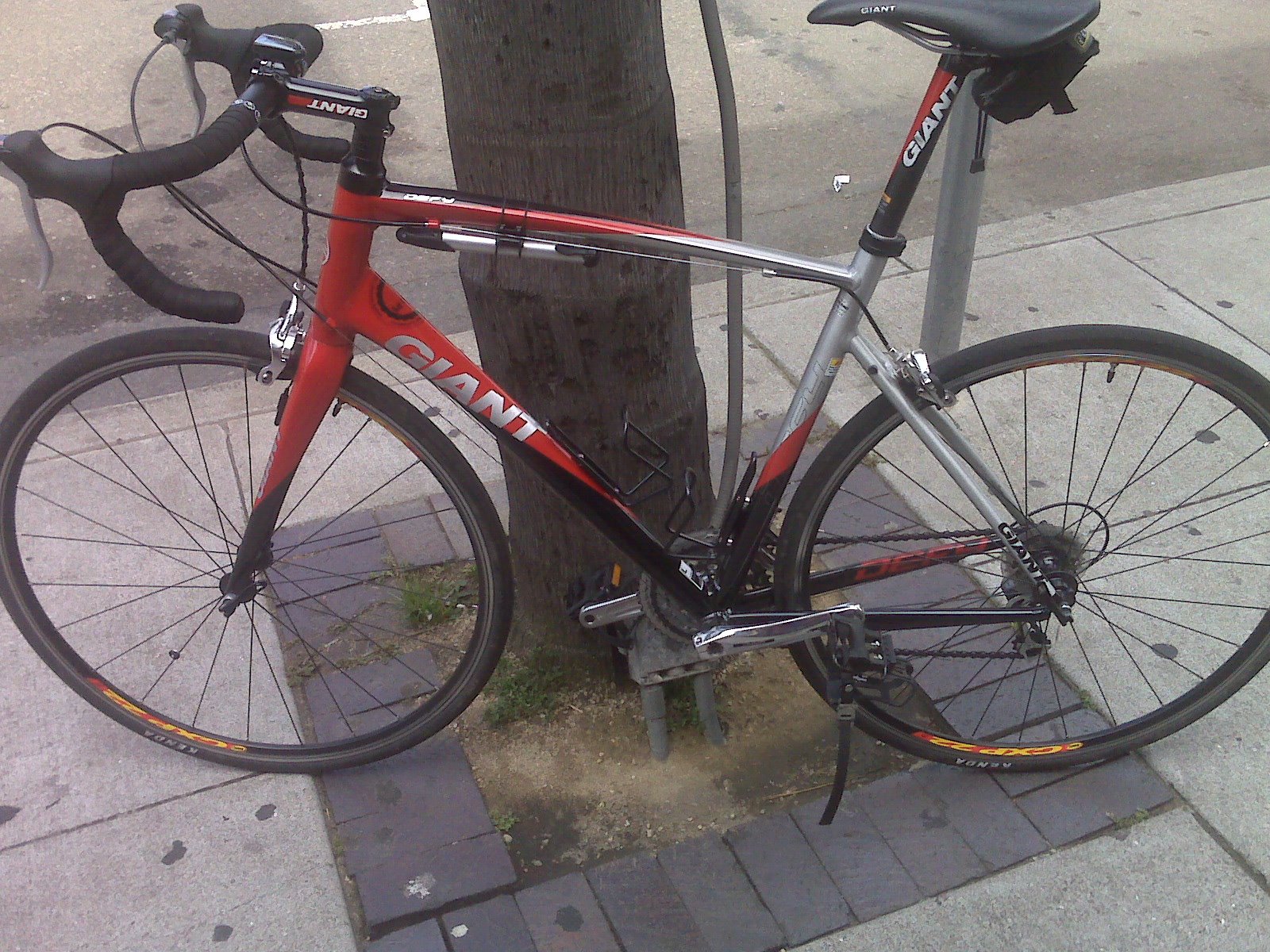 Back home I ride a mountain bike that isn’t even made by a bike company.
Seriously.
Its made by Reebok.
Yeah, the shoe company.
Its, to put it nicely, a heap of crap.
It weighs about 4 tonnes, and cost less than £100 new.

So, when I got on this £800 racing bike… Imagine the difference. I could easily lift this thing and carry it under my arm. Riding it was so easy compared to what I was used to. I could get it up to 25mph on the flat without really feeling like I was straining. My bike at home hits 25 mph going down the steepest hill i can find with me pedaling all out.

So off I went on a spin. I headed across the bridge and went up the hill and I saw this lovely view.

See that long, windy, very hilly road? Yes, I went down there. Many was that exhilarating. Scary too.. a bit… but really good fun. Amazingly enough, climbing it again on the way home wasn’t even that bad. What a difference a decent bike makes!

I followed this really pretty road out to Sausalito 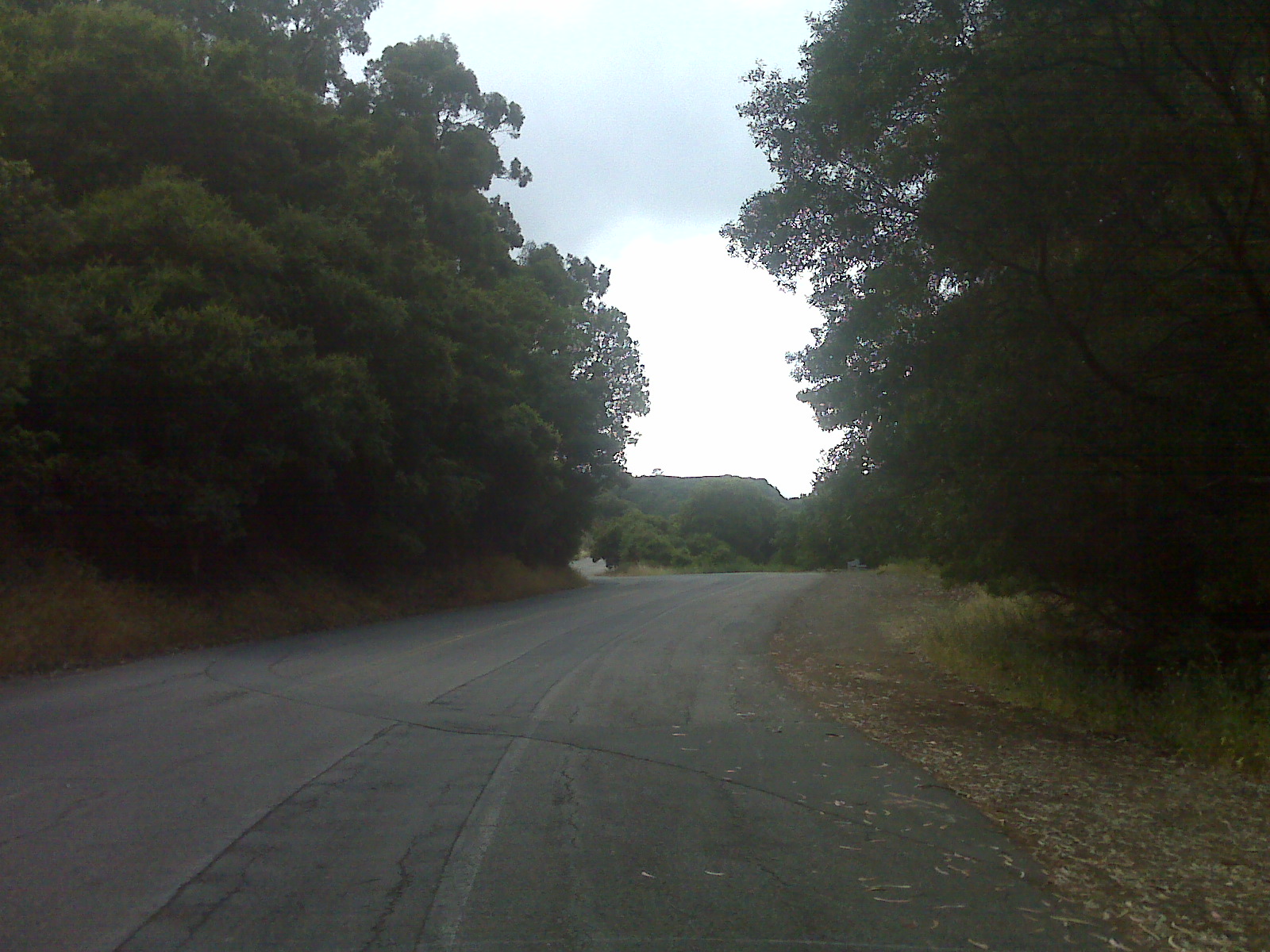 Once I hit Sausalito, there was a really nice cycle path.. so I just kept going.

Eventually, somewhere, I came off the bike path, cycled up a hill and decided that this sign was telling me it was time to turn round…

The view from this point was quite breathtaking… again, the crappy cam phone picture doesn’t do it justice, but at least you get an idea. 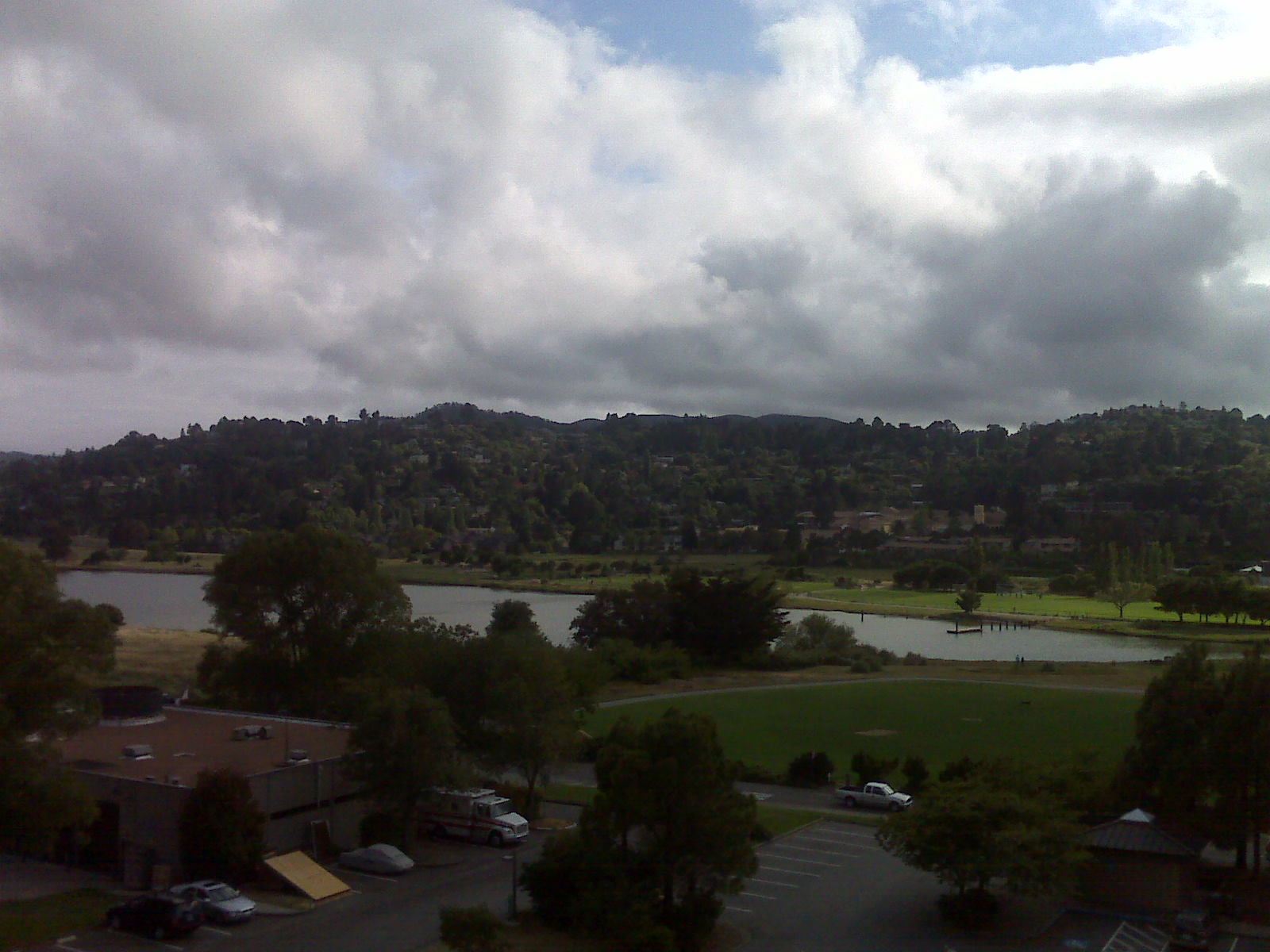 On the way back, once I came across the bridge, I turned a different direction from the way I came and took a spin up into the hills, then down through golden gate park and back (eventually after getting totally lost a few times) to the hotel. I ended up riding 33.91 miles. The longest bike ride of my life!

The next morning, I rose early once more and headed out for more of the same. This time I went a bit further on via another route and ended up in a place called Corte Madera a pretty little town. I stopped off here and popped into Pete’s Coffee to grab a caramel latte. When I came back out someone had left a little present for me in my bike helmet…

A cute little toy monkey.
Kinda weird.
But nice.
I put him in my bag and he will be joining me on my journey home.
I can only guess that the kid who owned him saw the helmet hanging there and thought that looked like a comfy bed for the monkey. Bet they didn’t expect that it would result in their little toy monkey flying halfway around the world!

After my coffee, I got back on the road and headed back. With sadness I handed the bike back and wandered down to fisherman’s wharf for some quality recovery food… Clam chowder in a sourdough bread bowl. Tasty

Total distance for the day was 36.32 miles. At one point though, I had paused the Garmin at a traffic light and forgot to hit start again and may have lost out on a mile or two, regardless it was still another longest ride ever.

4 thoughts on Back in San Francisco / Endurance