Before and After / Family running

I’m merging two topics together here. Y’know, because its my blog and I can damn well do as I please.

First up.. been planning on doing this for a while.

I ha vent been running / working out long. I started in summer 2008. There were a variety of reasons… probably foremost of which was my spreading waistline. I used to be a SKINNY guy. And man do I mean skinny.. underweight, malnourished looking. Often sick looking. So, it was rather a surprise to discover one day that I was a fat guy.

I wasn’t Gilbert Grape’s mother fat. But for me… a skinny guy.. I was big. My BMI said OBESE. In about 2.5 years, my trouser size had gone from a 30 to a 36.
That’s a hell of an increase.
Now, a year and a bit later, Ive got rid of most of the excess weight. I’m still not exactly where I want to be. There is still a bit of excess body fat I want to get rid of, and I still have a lot of toning up to do… but on the whole I think its time for a before and after photo.

First up, a nice shot of me and my proud stomach with my lovely wife taken in June of Last year. Shortly after I began running and long before it had a chance to do me any good. You can click the image to see it in all its glory. 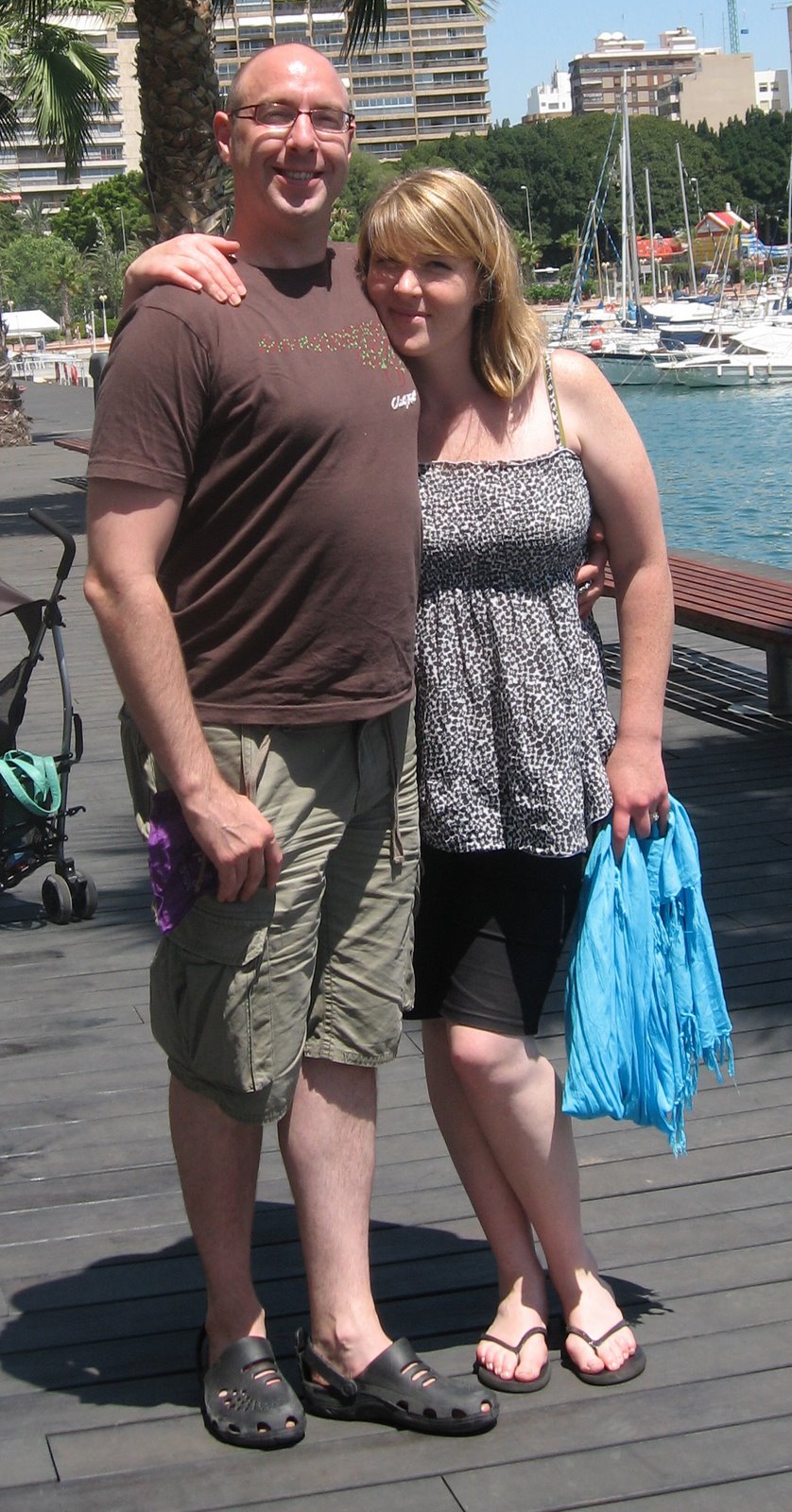 What a damn fine specimen of manhood. Check out that double chin. Check out those moobs. Admire the prominent gut. A lot of wine, GOOD food and hard work went into sculpting this Adonis like physique.

OK. Skip forward one year. I have not done any crazy diets. I still eat a lot of junk food. I still eat a PERIOD. BUT, Ive worked out a lot more. I run, bike and occasionally swim. To be honest, the running was all I did for the first 6 months or so. Ive really only started the biking this year. Since starting the cycling and swimming Ive found the weight loss easier. Although that’s because I now train at least 6 days a week.

On Wednesday night I did the Craigavon 10k. I dragged my long suffering wife and long suffering son along for the ride. Well.. not just for the ride. I signed them up for the 1km family run. Which was a lot of fun. So, my photos to show the weight loss were taken on that night… First up… me and the lil guy finishing the 1km race, and yes… he beat me. 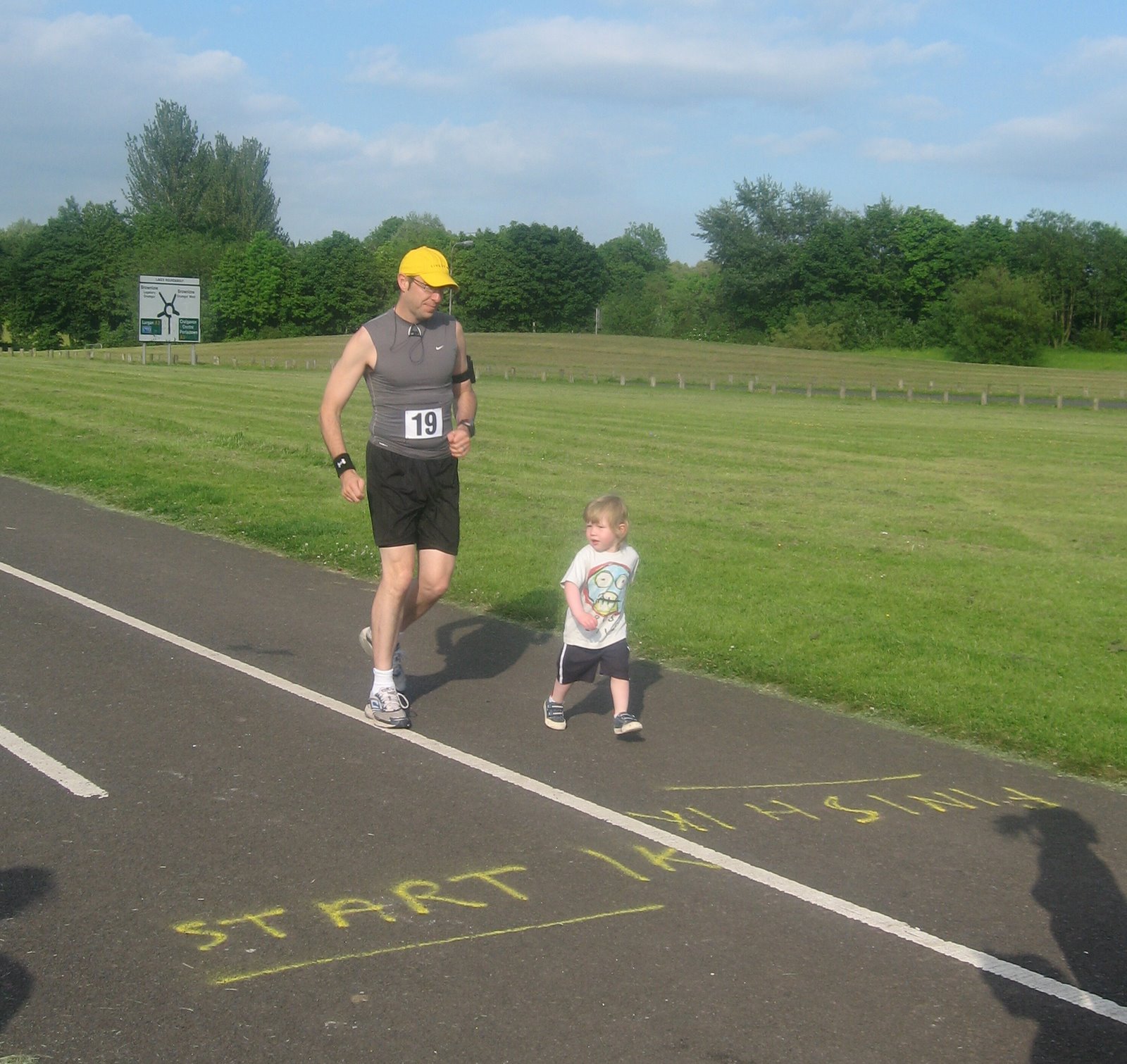 Now.. don’t get me wrong. I’m not a vain guy. I am no model. But I’m proud of the fact that i manged to go from overweight couch potato, to something that resembles a fit human being.
Ive enjoyed the journey and at some point, very early in the process, I became obsessed with running. I’m also sorta obsessed with the idea of triathlon, but until i do one, I cant say much on that.

So, I ran the 10k. My first 10k was a disaster.. I was injured and dragged myself round the course. My second 10k, my target was to do it in under an hour.
I did it in 48 Min’s and 30 secs (ish)
Which amazed me. I was really happy with this time.
My only aim with this 10k was to beat the last time… but I am in base training at the moment, have done no 10k prep and virtually no speed work.. So I was REALLY happy when I did the 10k in 45 min 49 seconds. Shaved nearly 3 minutes off the last one. Totally over the moon with this time.
The best thing was, the next day I felt fine. No stiffness, no pain, no injury. After the last 10k I was unable to run for a good few days and ended up having to see a physio and podiatrist. This time round, in the right shoes with orthotics.. faster and no pain.
Excellent.
In fact the next night i went out for a 13 mile cycle.

Anyway, here is me mid 10k. It was a very hot night so I was throwing cups of water over myself while running… so basically.. the wetness on the shirt isn’t all sweat.

I really enjoyed this run. I’m off to San Francisco again next week so will do another run across the Golden Gate bridge. Will undoubtedly blog from there.

Ive also been thinking of using this blog to put together some advice for beginning runners and first time wannabe triathletes. If anyone would like to see bog posts on this subject, please leave a comment.

Just to finish off, here is the before and after… side by side. 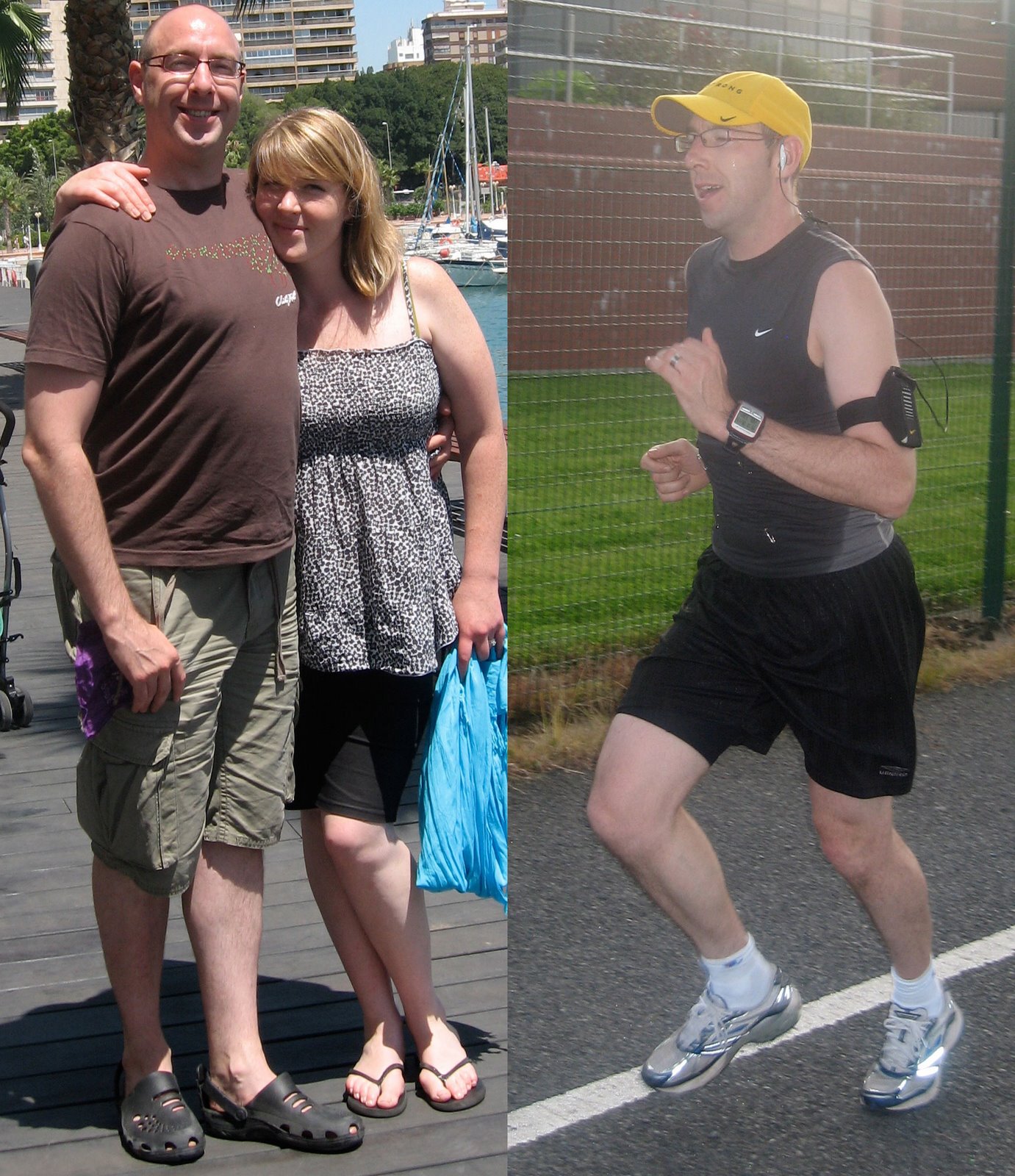 ← Back in San Francisco / EnduranceHello world! →

6 thoughts on Before and After / Family running