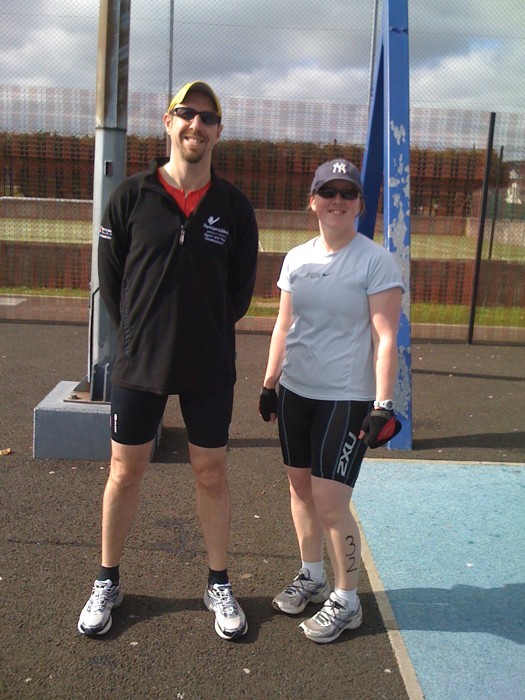 10 hour week in the bag. Did my first 5k swim on Friday. Which I completed in under 2 hours. Then the next day I competed in my first duathlon.
It was the midulster duathlon in Magherafelt. 2 mile run, 12 mile bike, 2 mile run.
Really enjoyed it. The field was pretty strong, i recognised a fiar few faces and those that I recognised I knew to be seasoned veterans. No on there looked like they were inexperienced. There was a LOT of nice and very expensive bikes. Plenty of people there with back wheels that cost more than my whole bike.

I went out, treating this as a hard training session and fitness test. I hadn’t tapered, and indeed had done the 5k swim the day before and my longest run in months on just Wednesday night.

I was very happy with the race overall. The first 2 miles I finished in 13:49 (6:47 AP). The 12 mile took 36:58 (19.5mph avg) and the second run which was actually 2.25 miles due to a lap of the track at the end took 15:26 (6:52 AP).
Add in transitions and I completed in 1:07:54. My target was 1:10 as a perfect performance so I’m very happy with this overall. My favourite part of the day was that no one passed me on the bike. I was at the tail of the leading pack going on the bike and while I played cat and mouse with one guy for much of the course, I ended up finishing ahead of him and no one else came close to passing.

My buddy Lisa who I am currently helping out with a bit of coaching also competed. It was her first multisport event and she performed really well, despite feeling that is was torture and almost giving up on the second run.. but she didn’t give up and she finished.. Much respect!

Today, despite the fatigue, I still got out and did my long ride, which I cut back to a 2 hour ride which was mostly on the flat. Tonight my legs are, without doubt, TIRED

Oh, and finally.. I can firmly recommend this as a warmup for a race….