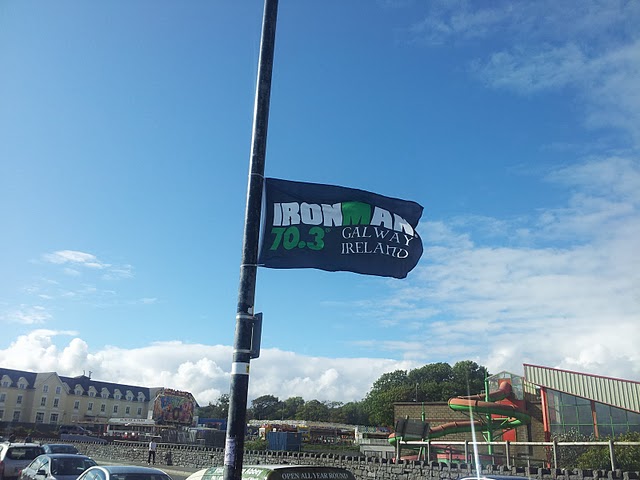 This is a long one with a fair few pics

Finally.. my A-race of the season.
Well.. this was always my planned A-race. However it ended up being a joint A-race with Groomsport. My main aim for the year was to complete 2 half Iron distance races 2 weeks apart.
I hit that objective.
The scale of the event in Galway was phenomenal. This was the first Ironman branded event I have been involved in and it really was huge. Just for context… this is the third half iron distance Ive done this year. The first had around 40 entrants. The second had 130. Galway had over 2,000
Wow.
I got up early on Sat, got the bike sorted and drove down to Galway. Sadly Steph had to work so she and the kids couldn’t come along as support. 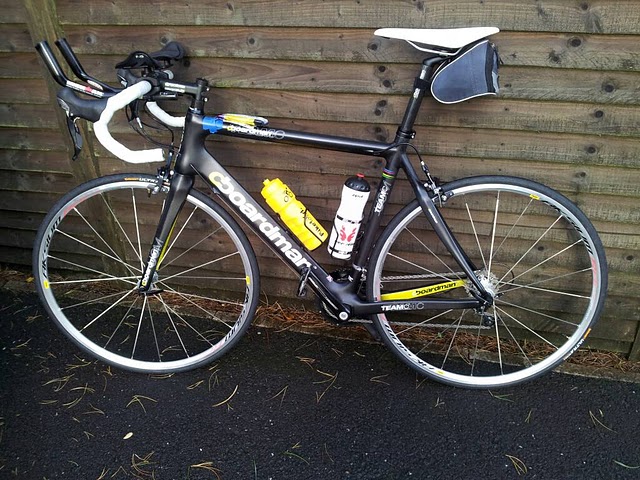 I got down in the afternoon and headed for registration and instantly the scale of the whole thing hit me. I walked into the registration hall and saw the massive Ironman banner and the scores of people and staff and was part excited, part nervous.

After registering and picking up my Ironman branded bag (with disappointingly little swag in it) I went out to sort out my gear into bags. This whole concept of having specific bags for each discipline and packing them and registering them the day before is new to me. All the other races Ive done over the last 3 years Ive just turned up on race day, dumped my bike and box of gear and that is it. For this you have to have far more organised. Once I got the bags packed though and headed to rack my bike I could see why.. and this is when the scale of it really hit me.

Bikes as far as the eye can see. The length of the bike racking area was huge. After racking the bike and registering the bags i went for a walk to see the distances involved in the transition. I reckon the distance from swim exit to bike mount was going to be easily over 1km. There would certainly be no fast transitions going on. I then went and checked into my hotel and pottered about until it was time for the race briefing. The briefing was the next stage in the whole thing being HUGE. I was in the second briefing. the first was for the first thousand. Mine was for the second thousand. The host was Mike Reilly, “The Voice of Ironman”, the commentator at all the major Ironman events including the world championships in Hawaii. The briefing was actually fun and entertaining and afterwards I felt a huge mix of excitement and nerves. Which is weird.. i mean, I had done this distance race just 2 weeks previously but the scale of all this definitely had an impact. 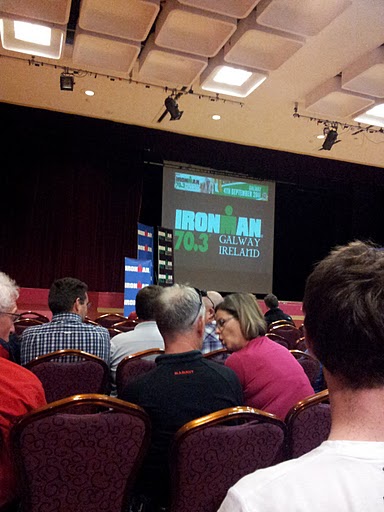 RACE DAY.
Race day was an early start. My alarm call was for 4:30 am. I headed out of the hotel and noticed a few other triathletes in the breakfast area. I joined them for some porridge and coffee then wandered out through the lobby which was still full of people drinking and partying who were at the hotel for a wedding. That was a bizarre moment!
When I arrived in transition it was still dark but T1 was busy.

I racked my bike and just wandered around absorbing the atmosphere. 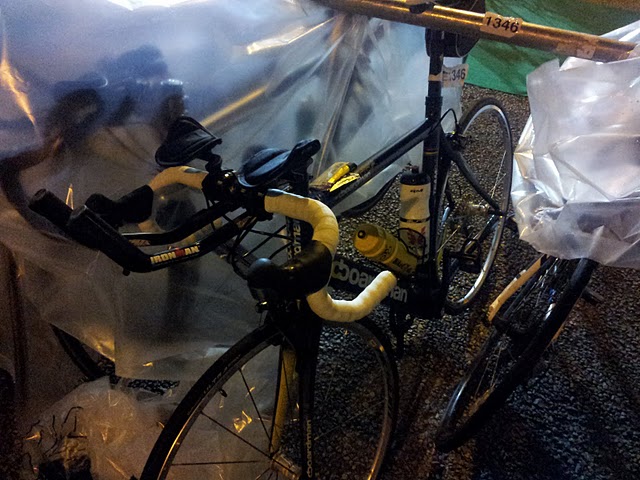 My wave was due to go at 7:05am.. just 5 mins after the pros. It was cold and very windy. I got changed into my wetsuit and headed down to the swim start. It was shortly after this that Mike Reilly came on the mike to inform us that due to the weather and the waves, there were a few changes. First of all the start was being delayed by 30 mins… secondly the swim was being cut to 750m. There were general mixed feelings on this. I myself had mixed feelings.. What bothered me most was the delayed start. At this stage it was about 6:40 and with a 30 min delay that meant standing about in the freezing cold and wind for nearly another hour. At this stage I was getting more worried.. I hadn’t packed any additional clothing into either of my bags. The sun was starting to come up though, which was good as I didn’t fancy swimming in the dark. The time passed slowly, but eventually we made our way down to the water. My age group was split into two sections based simply on the first across the mat. I was eager to go as soon as possible so pushed forward. Many weren’t so eager and held back so it worked out OK. We watched the pros go of then went into the water. I dropped down to flush my suit and fill it with water.. something that usually takes your breath away with the shock of the cold, but the water was actually around the same temp as the air and it seemed OK. Finally the horn went and we were off.

The swim was tough enough. The waves were big enough to make it really difficult to get into any kind of good rhythm, and to make sure I ended up swallowing a lot of sea water… but on the whole it was OK. My first ever open water swim at Causeway Coast tri last year was about 10 times worse. In retrospect I am glad that swim was so bad.. as everything since has been fine. Even this swim which was considered a safety risk didn’t really seem that bad and I exited the water feeling fresh and not overly exerted. It was slow though. There has been talk since that the swim was probably closer to 1km.. and as it took me just over 22 mins I would be inclined to believe this. This would be slow for me even to do 1km, but in rough conditions I think that is about right. Any time that I gained by having the swim cut short was rapidly lost in the massive transition. My T1 time was 7:40!!!!

I headed out on the bike and the conditions really were rough. It was cold, it was grey and it was raining heavily. I had opted to pack my prescription sunglasses into my bike bag and had checked in my normal glasses and it really wasnt a day for sunglasses! Despite the harsh conditions, I enjoyed the bike, as you can see from this photo, captured by the guys at Irish Triathlon.

The first 40 or so miles I had managed to sustain an average speed of over 20mph. I was really happy with this.. but the last section became really tough. The rain really started to drive down and a big headwind came along to really hammer us on the last section. There were quite a few accidents and crashes and I saw at least 2 ambulances out on the course. For the last 10km or so I started to harbour dark thoughts of DNF… the cold and wet had got right to my bones. My feet were numb blocks of ice and I couldn’t feel my fingers, and it was getting tough to even get the bike up to 16mph on the flat due to the headwinds. Despite all this I managed to massively beat any of my previous times on the bike and came in at 2:56:54… easily beating my perfect race day bike target of 3 hours.. and a full 16 minutes faster than Groomsport two weeks previously. When I made it back to transition. I dismounted and ran the long bike area on numb stumps, buoyed by this time and kicking those dark thoughts out of my head. Others came in at the same time and we joked with one another about how numb we were. I racked my bike, ran out, grabbed my run bag and sat down to change shoes. The atmosphere in T2 was great despite the conditions and when I jokingly yelled out “can anyone feel their feet?” i got a resounding reply of “NO!!!” yelled by about 15 people at the same time. One guy happily shouted “I’ve got dry socks though.. I’ve been looking forward to these for the last 20k!”

I knew what he meant. I don’t wear socks on the bike and my bike shoes had filled with puddles of water about 10km into the bike and had stayed that way the rest of the course.

I headed out on the run on my cold numb feet and just hoped like crazy that I would warm up.

The run course was really nice and the number of people on the course was amazing. It was 3 loops in and around Galway city and the atmosphere was fantastic. The supporters cheers helped keep the pain at bay, the buzz was great and the volunteers at the aid stations were amazing. The whole lot of them were so enthusiastic, cheering us on as they handed us water, coke and gels.

The run, for me, was good. I was solid and didn’t walk, other than to knock back some coke and water in the aid stations. My overall pace was better than in the last race and I felt stronger and better. I had nailed the nutrition on the bike a lot better too and thus had more left in the thank for the run. The only thing that made the run really tough was a few sections where the wind was just incredible. On the sections where the headwind really kicked in, my pace was slowed massively. My pace dropped from around 8:150-8:30min miles to around a 9:30-9:45min mile. Overall this knocked a good few minutes off my overall time, though I still beat my time from Groomsport here too.

The final run up the finishers chute was AWESOME. The cheers of the supporters was incredible. Running along getting high-fived by the kids in the crowd was such a buzz.. and hearing Mike Reilly shout my name as I crossed the line was just brilliant. The volunteer at the finish put the medal round my neck and I was damn proud of myself. 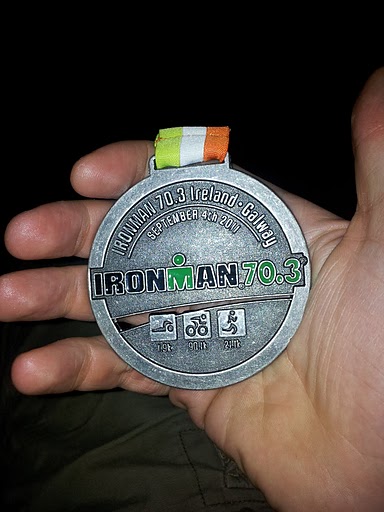 Overall.. it was a TOUGH race.. but it was all the better for being tough. Despite the crazy conditions, I knocked lots of time off my previous bike times and even managed to knock almost a minute down off my run time in Groomsport which was my best time to date. Overall my finish time was 5:28:48. My dream time for the day was 5:30. The swim being cut short obviously means that I didnt do the full distance.. but the time lost in transition and the battle against the elements means that Im very happy to take this as definitely hitting my target.

Thats 3 half ironman distance races done in one season. Two of them done two weeks apart. PR’s set and smashed. Thats a happy end to my 2011 tri-season.