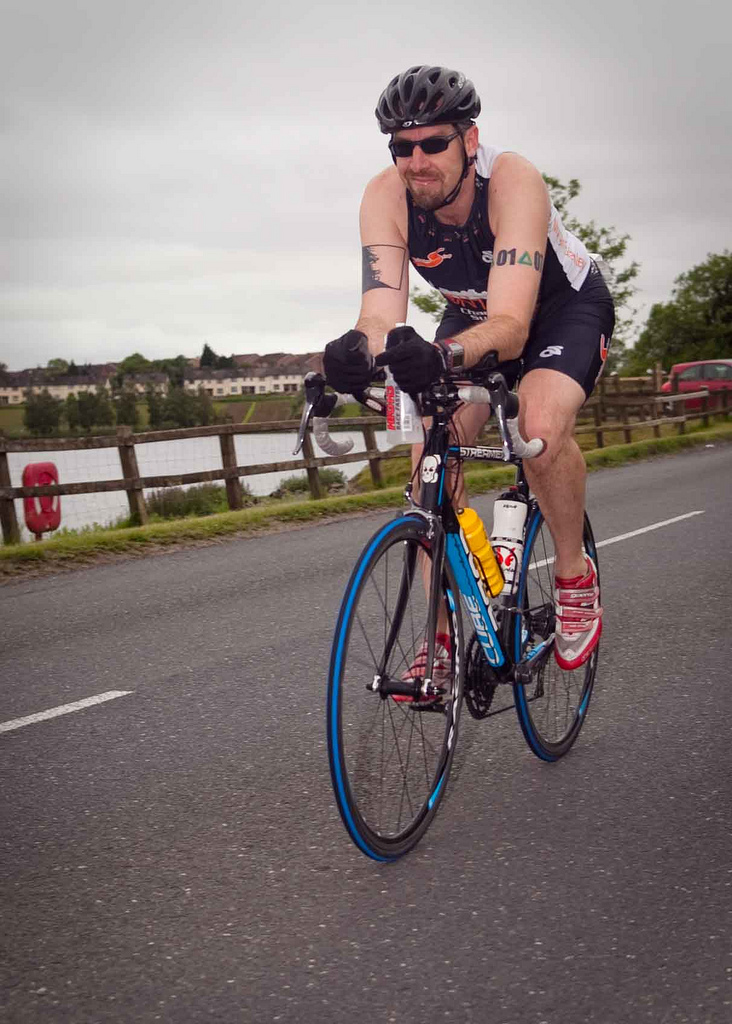 Saturday was the first triathlon of the season for me.
The approach to this race was a bit of a mental battle.
It was my first race since the broken wrist, my fitness levels still aren’t where they need to be and on top of all that I developed some kind of random and inexplicable problem with my hip.. it hurt to walk. No idea why or how it happened.

In the month or so running up to the race I went through a variety of plans.
initially, due to the fact that I hadn’t had a swim in about 8 months, I figured I would skip the swim and just do a long bike ride and run. However in the last few weeks I managed to get back in the pool twice. The first time was a 1500m session, the second was 3000m. So having concluded that I might manage the swim without drowning, I decided to give the whole thing a go. Then the hip problem kicked in. So I figured that I would try the swim, and maybe the bike and not run.

In the last few days coming up to the race I seriously considered just dropping it. However I got some great advice from my mate Iain, the nutter who calls himself a “lazy triathlete” but who qualified for and raced Kona last year


Maybe do this weekends race but have it in your head that if the leg gets too bad you’ll stop. That’s what the Pro’s do, Chris Lieto dropped out when he was leading IM Texas last week because he’s carrying an injury. Jodie Swallow did the same in St George. They got in a solid swim & bike training session then put a few miles in their legs.

This made a lot of sense to me. I guess in a lot of ways I probably had a lot of psychological blocks against doing the race anyway.. First race back after a serious injury.. Is a half ironman too ambitious? Can I complete a half ironman with nowhere near enough training? etc etc etc…
Anyway.. I turned up on the morning pretty convinced that I wouldn’t finish the race. I always try to set a series of goals, the biggest goal being the most achievable.
Normally my first goal is to finish…
For this race, my main goal for the day was to start.
My next goal was to finish the swim, then to finish the bike.
In honesty.. that was about it. I didn’t really even expect to start the run.

So I turned up on race day and wasn’t even really nervous. The field was STRONG. I mean.. you could tell by the bikes and the look of the folk who were there. It was a small race, around 40 entrants. Still though, everyone was very friendly and the organisers, “Tri-limits”, are really nice guys. If you ever get a chance to do one of their races I highly recommend it.

The nerves kicked in a little when I stood and looked out at the lough. I’ve only done two open water races before, the causeway coast Olympic and my first half ironman at groomsport last year. In both cases the swim was 2 laps, which was nice as it gets you out of the water and gives you a few seconds rest from swimming. this was one lap, and looked LONG. A photo of the lough is at the end of this post. Still though, my aim was just to start, and there were lots of people out there to rescue me if i started to really struggle, so I racked up my bike and got myself ready to give it a go.

The swim turned out to be really nice. The water was warm and clear and as there weren’t too many people it was pleasant. No one swimming over you, kicking you, punching you.. and no insane waves or tides. Just a nice little swim in a lough to start the day. In all honesty I think the swim distance was a bit short as I completed it in 25 mins and I’m NOT a great swimmer. the last 70.3 I did it in 30 mins and I hadn’t done any training to explain any significant improvement, so I’m assuming it was short but am happy to have done it. I came out middle of the pack, took my time in T1 and set out on the bike. 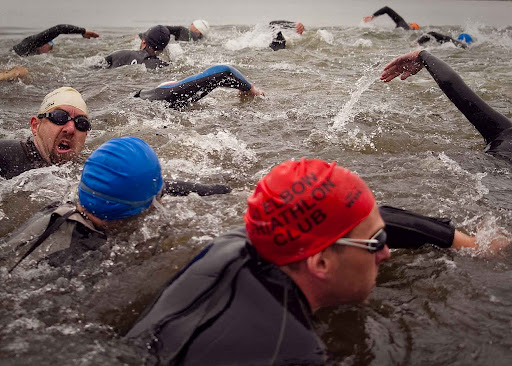 The bike course was lovely. No real winds, nice rolling hills that weren’t steep enough to really push you on the climbs but were steep enough to get well over 30mph on the descents. I actually really enjoyed the bike and felt good and strong for the first 46 miles. The last 10 had a bit of a headwind and a few too many hills which slowed me down a fair bit. However I still completed the distance in 3:06, a 3 minute improvement over my time in the Groomsport race last year which was a 3:09. Overall I felt better on the bike in this race too.

Now, to be honest, by this point my goals for the day started to change. I started the day giving myself about a 15% chance of finishing. However from about the halfway mark on the bike, I knew I had PRed the swim and was starting to think I might PR the bike. Despite the slowdown for the last 10 miles, I still finished pretty strong. The big challenge, of course, would be the run.

I wasn’t sure if I was going to be able to run at all, and dreaded feeling anywhere near as bad as I did in the last 70.3… However when I racked the bike and set out on the run I actually felt OK. Nothing hurt and I was running at about an 8:30 pace. I forced myself to slow down and just kept going. It was a 4 lap course and I ran the first lap solidly. I walked the water stop, for about 10 seconds, then ran the second lap solidly again. From about mile 8 on I had to do a little bit of walking on each mile, but I had managed to avoid walking for the first 8 miles, whereas in the last race I had been walking from the start.

So.. I set out to start, and didn’t think I’d finish. I ended up PRing every distance and running a much better race than last time. The swim may have been a bit short but the bike was fine with a small improvement there and the run was a massive improvement. My previous finish time was 6 hours. This one was 5:39. I’m very happy indeed with this.

Thanks to the guys at Tri-limits for putting on a great race and thanks to all the friendly participants who made it a really pleasant race. And a final thanks to the guy who actually recognised me from this blog.. which was great as I didn’t realise anyone really read it

I was buzzing so much from finishing that I didn’t catch your name so if you re reading this, drop me a comment… 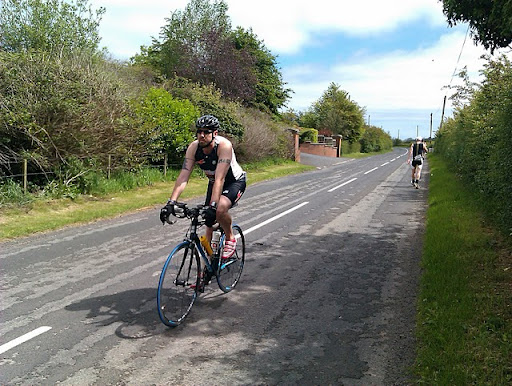 Not sure who took this, but I look a lot more laid back… found this pic on the Irish Triathlon website.

My own photo of the lough.

9 thoughts on Eskragh Half Ironman