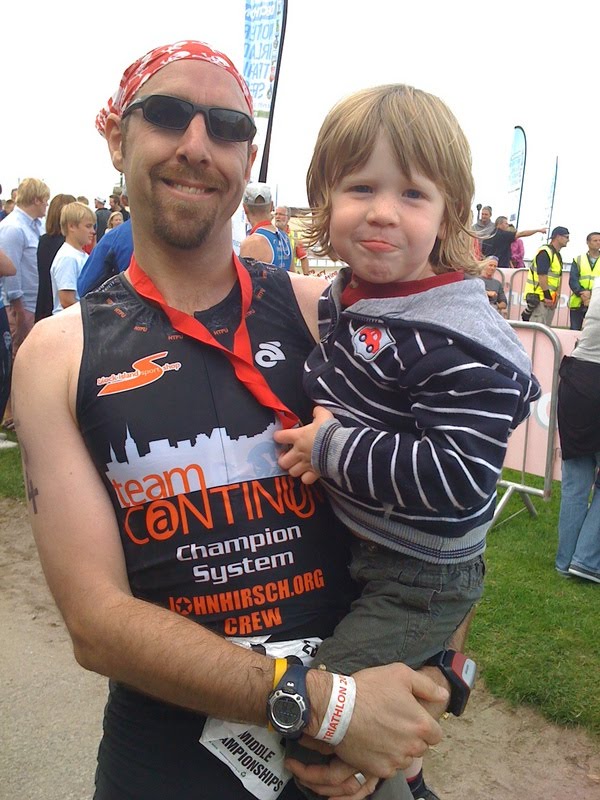 I’m going to actually try and make this a concise and short race report.
Yesterday I did my main “A race” for the year.
This was essentially what I had been training for all year.
Beyond that it was the next link in the chain that ultimately leads to doing a full Ironman. Suffice to say this was pretty important!

I had been really concerned over the last few weeks. I was injured. I’d been to see a physio a few times and I hadn’t trained AT ALL for the last 3 weeks. You could consider it an extended taper… but my original intention would have been one more BIG week of training with 2 weeks of actual tapering (ie still training but less).
Instead I got 3 weeks of inactivity and, funnily enough, weight gain… Not ideal, but those were the cards I was dealt.

I arrived on race day excited and nervous. Nervous of what i was about to do, and even more nervous that my knee was going to pack in on me. I was early and I wandered around soaking up the atmosphere. It was awesome to bump into Lisa and her family as they had come down to give some support

As the start approached my nerves got worse… but so did the excitement.. eventually they led us out of transition and I walked with the 200 or so other competitors down to the beach.

THE SWIM
My last open water swim was ROUGH the sea had been very choppy and rough.. this time round it was flat and still. Last time round I also went out too hard, this time round I deliberately started as slow as I could.. and the tactic worked. The swim felt easy, I stayed relaxed and even when I got thumped or kicked in the head, it didn’t throw me off (too much) and despite taking in some water, I cruised the two laps in what felt like a pretty easy 30 minutes and 10 seconds. For a 2km swim I’m very happy with that, especially considering the last one was only 1500m and took me 43:35. I took my time in transition and felt ready for the bike.

THE BIKE
The bike course was lovely. It was flat and pleasant with lovely scenery. In retrospect I realise now that I went out too hard.. but it felt good. the injured leg gave me a few twinges that caused me to hold back a little, but overall I was more than happy. Along the course the occasional spectators and the cheers from the volunteers was a fantastic boost.
At one point along the course I was going through the village of Donaghadee and totally unexpectedly saw my wife with Alexa and our friend Fiona. This unexpected site and their cheers of encouragement literally brought tears to my eyes

Although I did instantly realise that tears were a loss of body fluid that I couldnt afford and knocked that on the head immediately.

According to my garmin the course was a few miles long, so my time of 3:09:32 was perfect and I was pretty much on course for my best possible scenario race day… but with the lingering injury the worry was always the run…

THE RUN
I racked my bike, pulled on my shoes and headed out on the run and IT HURT STRAIGHT AWAY.
Funnily enough, the majority of the pain was in the leg that wasn’t previously injured… although Id been feeling some twinges in that knee, probably from overcompensating for the injury. I knew within minutes that there was no way I was running the whole course. In fact I was very worried that I was going to have to just walk the whole thing.

As I progressed through the second half… It got harder. For the last few miles, I was having to throw in little extra walk breaks now and again.
But the knowledge that I was going to finish kept me going. I had totally lost track of my time, I was convinced that I must have stopped my stopwatch and re-started it at some point and i was convinced that I was about 15-20 minutes slower than it was saying. There was no way I was going to be close to 6 hours… as long as I was under 6:30 I was going to be happy.

As I came down the hill towards the last stretch, my awesome and amazing and supportive wife was there cheering. I head the announcer saying something that led me to believe I could still make it in under 6 hours… BUT, I didn’t care. In the last race, at the end, Zane was there and came out to run beside me, but I was so focused that I didn’t really see him and kept running. He ran beside me, but I was disappointed in myself for not realising he was there and running with him. I was NOT going to do that again and I didn’t give a shit what the time on the clock was.
I stopped dead
“Wheres Zane?”
“He is over there on the beach!”
I shouted to him and he came over.
I took his hand and asked him if he wanted to run with me and he said yes…. So we ran the last stretch, hand in hand over the finish line. There wasn’t a huge crowd but the cheers were amazing from those that were there, and the fact that I was running with Zane seemed to make people cheer even more

I crossed the finish line in 6 hours and 10 seconds and crossing that line, holding my wonderful son’s hand was an incredible feeling.

SUMMARY
So, despite an injury, my last few weeks training being messed up and it being my first half ironman, I hit my target of 6 hours. Looking at my splits based on my training, experience and the level I am at, I think I was as fast as I could have been in the swim and fast as I could have been on the bike. The run was not even close to what I could have done if I was in peak running condition. But a 2:19 half marathon that is mostly off-road is still not bad, especially considering that the entire 13.1 miles actually felt like the last 6 miles of a marathon!

During the event, and particularly on the run, I gained a newfound repsect for those that do the full Ironman distance. While running it did run through my head that there was no way I could ever do that. I can though. And i will.

A few photos from the start courtesy of Lisa… 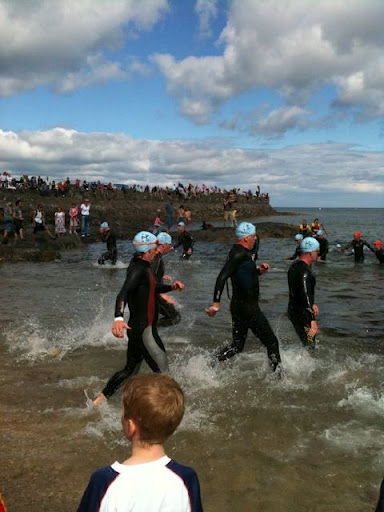 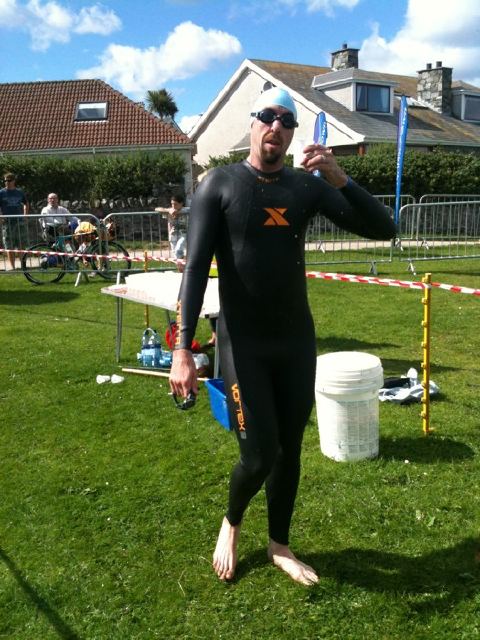 ← Life is full of challengesTwo weeks out… →