Kickin off the season…

This week was a busy one. I had a cold, travelled for 40 hours to the west coast of the states and back, had jetlag from hell and kicked off my triathlon season.

Not the easiest of weeks!

While over in the states I manged to get a few training sessions in. I went for an amazing 1 hour trail run in San Diego out in the Torrey pines State park in La Jolla. Spectacular trails that included a 1300 ft descent and climb. Not easy, at one point i was running (kinda) up and 18% grade. A hell of a lot of fun though.

The next day I met up with a Triathlon buddy, Morgan and we went for a nice easy 8.5 mile run down by the coast. It was his first long run since completing his first half -ironman so I was picking his brain extensively for tips. Meeting up with a friend while away from home is great and we had a cool afternoon training and hanging out.

SO, fast-forward to the weekend. I got home, suffered the worst jetlag Ive had in a LONG time and then come Saturday morning its time for the first tri of the season.

The tri was in Roe Valley, near limavady here in Norn Iron. Nice spot. I was very excited about the race. The bike course was actually pretty hilly and while this was in no way a priority race for me, i was very keen to see how my fitness was and how the winters training had come together. Also this was the first time Steph had been able to see me race a tri so I was extra excited about that.

On the morning of the race I wasn’t certain whether to bother bringing my Garmin or not. For the simple reason that I wasn’t going to be speeding up or slowing down based on anything it could tell me. In the end my decision was made for me as it turned out I had left it in work! So, stopwatch it was!

My friend Lisa, who I have been coaching, was in the first wave so I got to watch her and she did really well. A strong swim in a good time. Great to see.

Then I got myself ready and I hit the water in wave 3. Amazingly enough, one guy who was in my wave actually knew me… and apparently reads this blog! I was kinda nervous at this stage and this totally threw me so I didn’t even catch his name.. so dude, if you’re reading, drop me a note! 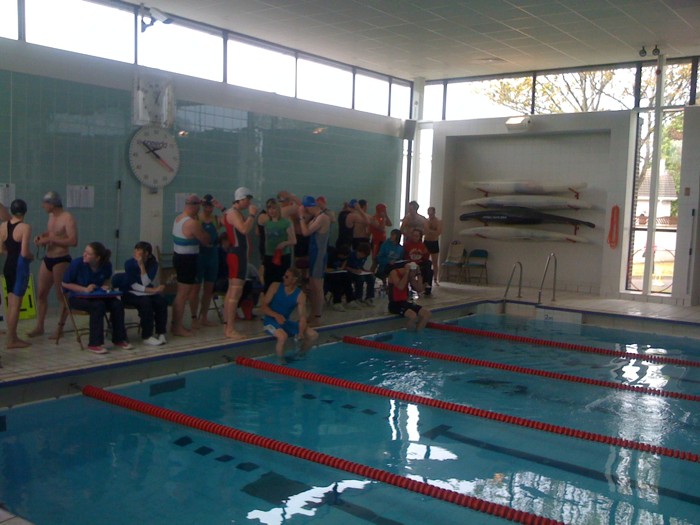 The swim was OK. I probably could have been in wave 4, the slightly faster wave, as I had put in last years times. It looked like I was second fastest so I set out second. The swim was pretty tough going. I had probably drunk too much coffee beforehand and that combined with nerves had my heart rate way too high and this made breathing difficult so my swim was a bit scrappy. I was happy enough with it though and actually ended up being out of my lane first.

T1 seemed pretty fast then it was out on the bike. I pushed hard on the bike, the course was pretty hilly overall. Definitely not a fast easy ride! Luckily no one passed me on the bike and I passed a few people. Towards the end I think there were only 4 people ahead of me from my heat and we all came in pretty close together together with me as the last of that group to get in.

The run was flat enough and went well, I passed 1 of the 4 who had been ahead of me right at the start and was chasing down a second from about the halfway mark.. I just managed to get ahead at the end and crossed the line once second before him.. So I totally thank him for giving me the motivation to sprint across the line

I actually hadn’t hit the start button on my stopwatch when I was in the pool so i didn’t get my overall time till the official results were posted, although I was happy with my time. Today when I saw the result I was very happy. Here are the results with improvements over my time in Lisburn last year

A 6:36 improvement. YAY.
Very happy with this not just with the overall time but I also PRed at each of the individual sections. That’s the fastest 5k I’ve done, fastest 750m swim and the fastest 20k bike. Plus, I know there is still significant room for improvement in this season.

In terms of overall placing I came 62/ 156 overall and 13th in my agegroup.
For a non-priority race at the start of the season for someone who has only done 2 sprint tri’s before.. I’m DAMN happy with that.

Oh, and I am not setting my sights on a sub 20 min 5k. I’m gonna do it this season. I also now have a good measure of my fitness on a short course and something to aim for for the next few races.

Lisa also kicked some ass in hers and confirms that she has now been fully bitten by the triathlon bug. Whooohooo…

So, today as I still had a 3 hour ride to do. Amazingly enough, not only did I get out and do it, I actually managed my furthest distance for a 3 hour ride too hitting 53.4 miles in 3 hours flat. An improvement over my previous best by a few miles. This is also good as now my target of a sub 3 hour ride in the half Ironman distance seems achievable. So tonight I’m feeling pretty tired, but very happy indeed.

Glad its a rest week this week though

7 thoughts on Kickin off the season…